Riverside erosion in Roeburndale
There are two main sets of weather conditions that lead to erosion in Roeburndale.
The first is when the ground is warm and dry. Under these conditions rain is very slow to infiltrate into the ground and runs off very quickly.  When the rain clouds are large, high and full of cold rain there can be a difference in temperature of up to around 15deg C.  When this cold rain lands in warm water it sinks to the bottom and creates a water vortex across the water course. Cold and warm water don't mix easily. They behave like separate ropes of water. Under these conditions when the rainfall is around 50mm in 24hours, a considerable amount of erosion of the banks occurs. This leads to the river becoming wider and shallower.
These are the conditions that occurred in Wray Flood in August 1967 when 117 mm of rain came down in 90 mins causing devastation in Wray and down Roeburndale.
(In comparison with this cold rain into cold water flows in  longitudinal vortices and the flow is concentrated towards the middle of the river.)
The second is when the ground is fully waterlogged and no more water can infiltrate into the ground. Under these conditions the rain runs quickly off the ground and fills up the water courses. Under these conditions the rain water and ground water are usually the same temperature.  The river flow tends towards longitudinal flow down the river and water moves quickly down the river.  This speed of flow and quantity of water causes erosion.  These are the conditions that occurred in Flood Desmond, 5 Dec 2015, when the extreme flow in the Lune was the highest recorded for a UK river.  The Lune Catchment of 983km2 created a flow of 1700 cumecs, or 41 Olympic swimming pools every minute.
The rainfall in Roeburndale was around 110mm in 24 hrs and undercut many trees along the bank.  This was small in- comparison with Wray Flood when at least one thousand trees went down the river. The main damage from Flood Desmond was flooding in urban areas such as Lancaster. (The flood costs from Dec 2015-Jan 2016 in UK were between £1.3 and £1.9 billion.)
Other Factors that encourage flooding
Both of these flow forms are exaggerated by land that has been damaged by fire. This creates a waxy surface that doesn't absorb water.
Flow is also speeded up by land that has been changed by grazing to grassland rather than heather and other blanket bog species. An intact area of blanket bog with mosses and tufts of dwarf scrub holds more water (up to 80% more) and keeps the water cooler and therefore denser. Water becomes more dense as it moves towards 4 deg C.  At this temp there is maximum absorption and refilling the ground water and the spring sources.
Land which was drained with grips such as Whitmoor Common, in the 1950's and up to 1980's speeds up water flow.
Land which has been opened up by erosion such as the peat hags on Goodber Common leads to fast run-off and more peat erosion.
Once the erosion pattern is set, it increases the intensity of flow. This "blood vessel pattern of gullies" can be clearly seen below Mallowdale Pike running into Colros Beck.
Under these conditions the fast flow of water pulls water out of the surrounding land and lowers the water table. This makes the land less able to easily absorb water. The concentration of water in the gullies creates conditions for additional erosion.
In an ideal situation the water flow should be out from the gullies towards the ridges spreading water over the land, enabling water absorption over the whole land.   If the land is additionally covered with vegetation that helps cool the land towards 4 deg C then even more water is absorbed.
The River Roeburn and Hindburn have flooded fairly regularly. When the river level at the measuring station near Mealbank Bridge measures  2.3 m then trees are usually eroded away from the bank or from landslips. These trees can be seen moving down the river.  Pre 2015 the river flooded to this level approximately every 3 years.
Between Dec 1st 2015 and Dec 1st 2018 it has flooded to this level 3 x per year. 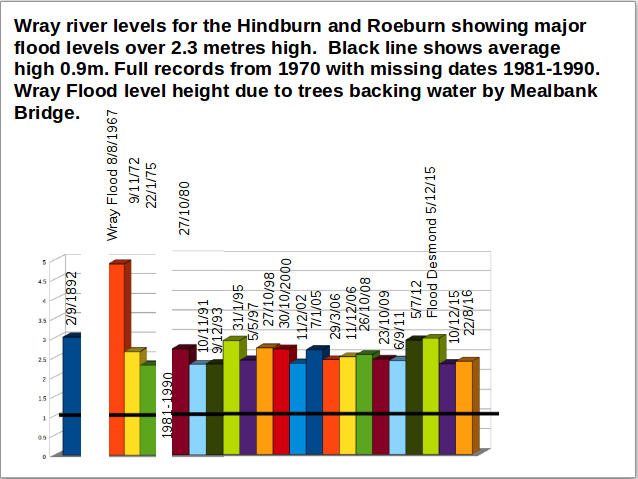 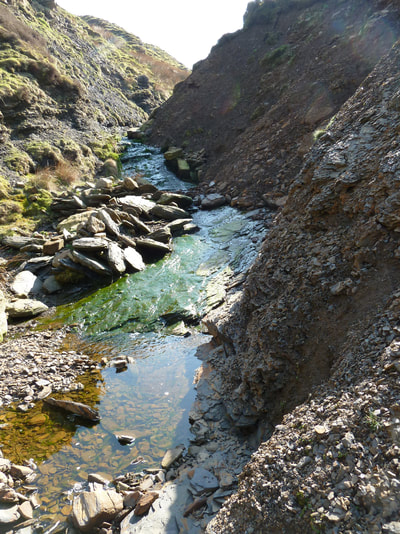 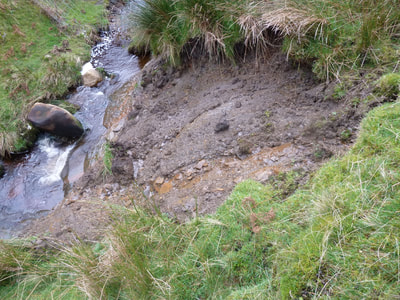 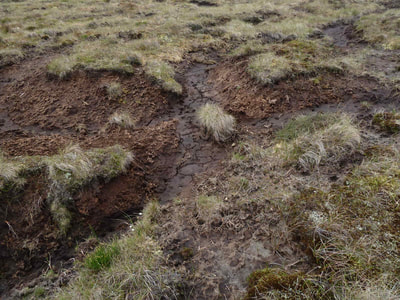 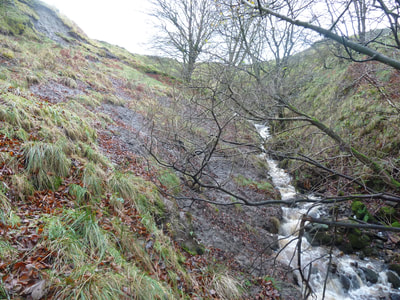 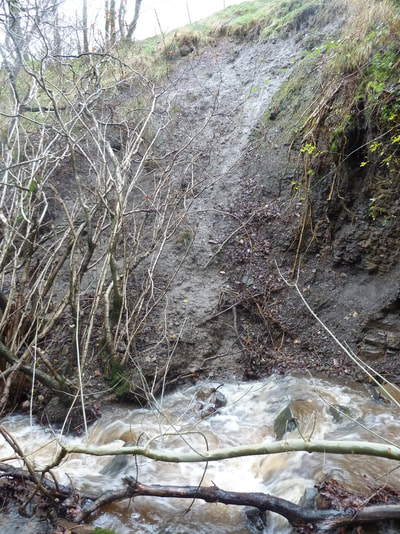 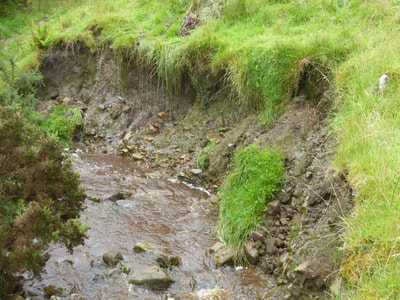 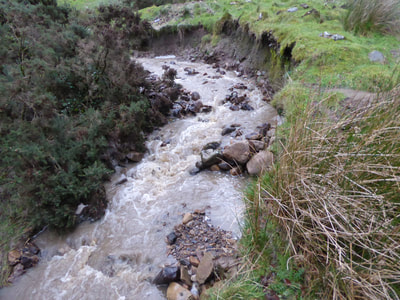 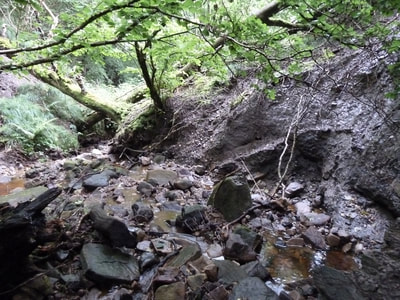 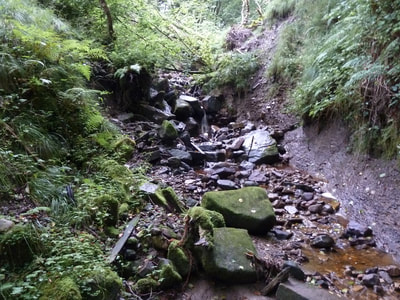 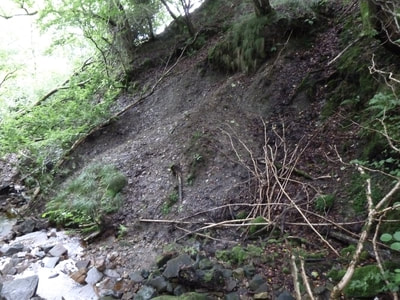 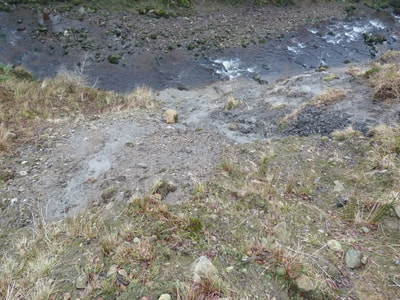 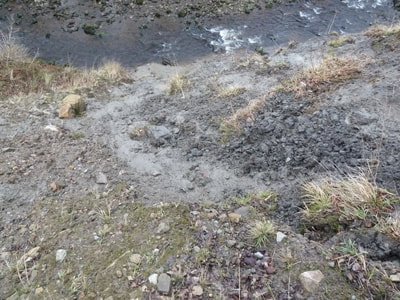 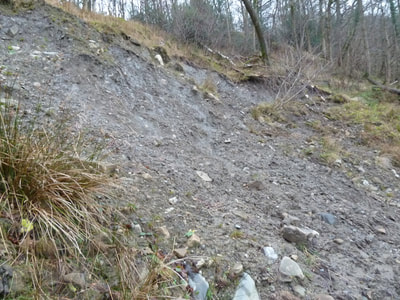 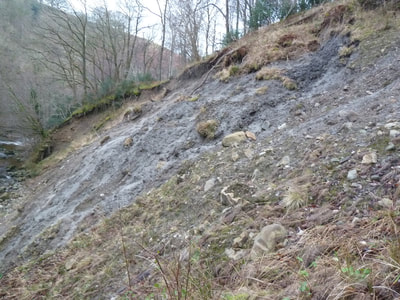 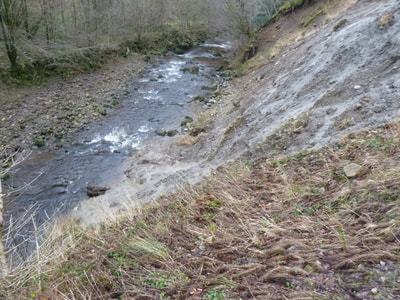 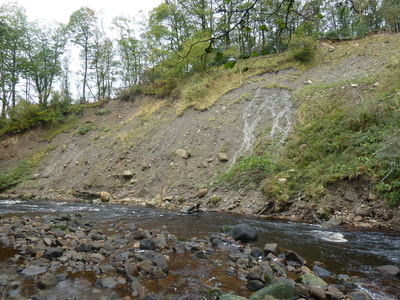 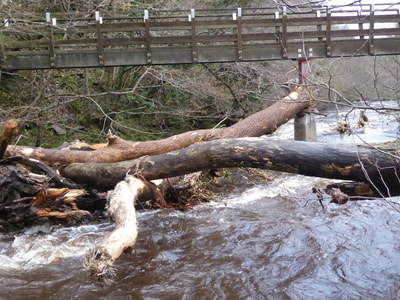 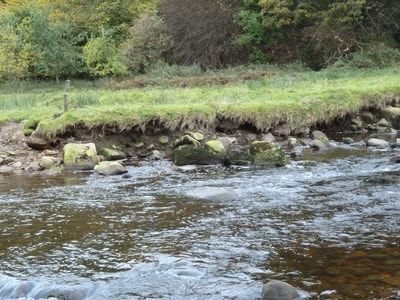 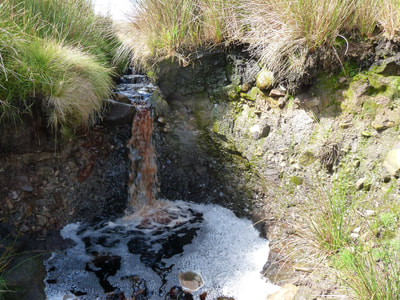 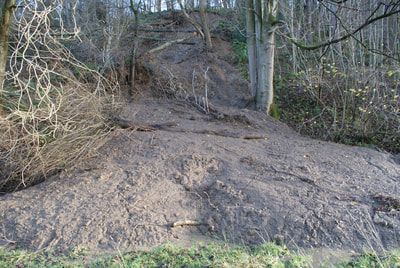 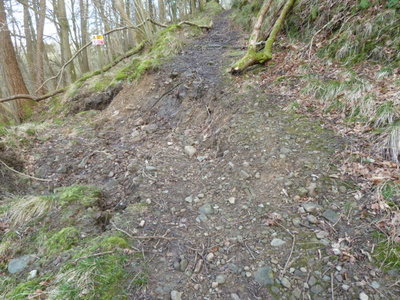 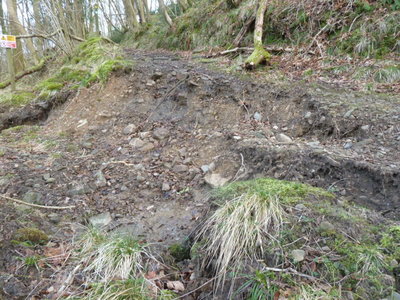 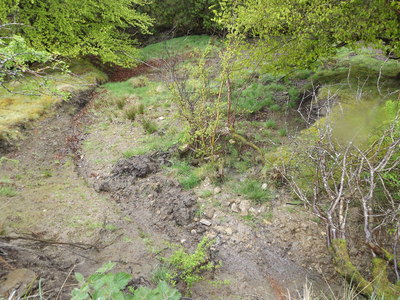 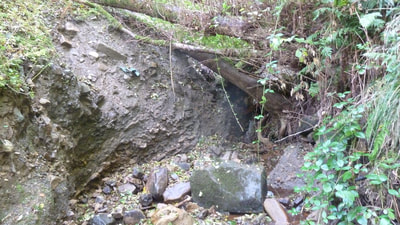 All of these areas in Roeburndale are eroding badly and they add sediment into the river. Landslides pull trees into the river.
The sediment and peat reduce the oxygen levels in the river reducing its wildlife diversity.
Often these landslips are caused by a small occasional stream that appears in extreme weather and this can undercut the clay soil and lead to landslips.
This short video is of a flooded footpath in Roeburndale Woods. This contributed to a riverside landslip.
Fast run-off in gullies can pull moisture from the adjacent fields making them drier and less absorbent to rain water.

See shortened video of the upward spiral to help understand how gullies form and get deeper as well as some solutions.  https://youtu.be/s8qmJNn-S08